Bulk Biceps is a male human and a student from Canterlot High School.

In My Little Pony Equestria Girls: Rainbow Rocks, Bulk Biceps is seen in the gym when Principal Celestia and Vice Principal Luna are on stage. He also participates in the CHS Musical Showcase playing the violin. He eliminates MC Snips and DJ Snazzy Snails in the first round, but is eliminated by the Rainbooms in the second. He is also seen fighting with Derpy while Lyra Heartstrings and Sweetie Drops restrain her. During the ending credits, he helps lift up Sunset Shimmer so she can reach Angel on a hard-to-reach perch.

Bulk Biceps appears briefly in the encore short Life is a Runway, smiling awkwardly at Rarity when she passes him by. In Friendship Through the Ages, Bulk Biceps partially appears attending the concert during Rainbow Dash's verse.

Bulk Biceps has a brief non-speaking cameo appearance in All's Fair in Love & Friendship Games where Sweetie Drops defeats him in an arm-wrestling contest.

In My Little Pony Equestria Girls: Legend of Everfree, Bulk Biceps suggests that the CHS students at Camp Everfree do arts and crafts. 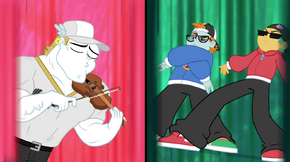 Retrieved from "https://equestriagirls.fandom.com/wiki/Bulk_Biceps?oldid=90586"
Community content is available under CC-BY-SA unless otherwise noted.