Cranky Doodle is a male human and a teacher at Canterlot High School.

Cranky appears as a teacher in the animated short Music to My Ears.[1]

Cranky has a brief cameo teaching a class hearing Vice Principal Luna over the loudspeaker. He also appears in a photo during the credits.

A Little Birdie Told Me

Cranky holds a pop quiz in a certain classroom where Fluttershy and Trixie Lulamoon were studying.

In chapter 15 of the My Little Pony: Equestria Girls: Rainbow Rocks screenplay novelization of animated shorts, "Cranky Doodle was storming down the hallway in his usual grumpy mood when, all of a sudden, he jumped up in the air, did a split, landed, twirled, and opened the door to his classroom, singing and smiling." Later in the same chapter of the same book, "the kids in class just seemed noisy. Someone threw a paper airplane across the room. Another kid flung a spitball. Cranky Doodle yelled at them." 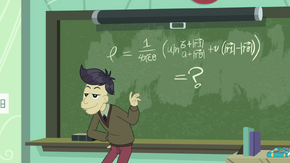 Retrieved from "https://equestriagirls.fandom.com/wiki/Cranky_Doodle?oldid=89554"
Community content is available under CC-BY-SA unless otherwise noted.