My Little Pony Equestria Girls hosts an array of creatures that have a counterpart in both mythology and fantasy, some of which are far more removed from their realistic counterpart than usual animals. A few creatures, like dragons, have speaking roles and display sapience when interacting with the protagonists. Others behave more like animals and neither speak nor display sapience. While most beings are from real-life known myths and legends, others are completely original and made up for the series.

In My Little Pony Equestria Girls, Sunset Shimmer transforms into a demon after donning the element of magic, using its power to turn the human counterparts of Snips and Snails into demons as well.

After transforming, all three humans gain flame-like hair, tattered bat-like wings capable of flight, four clawed fingers, pointed ears, sharp teeth with elongated fangs, and forked tongues. Their clothing also changes, with Sunset wearing a flame-patterned frock and boots, while Snips and Snails wear similarly patterned tunics and leggings. However, Sunset's demon form appears more monstrous: she increases in size, her voice deepens, her skin turns a reddish color, her ears are more jagged, the sclera of her eyes become black, her nose shortens, her mouth is more stretched out, and she gains a flame-like tail and hair. Snips and Snails retain their normal skin color and size, and have red eyes and no tails.

The three are returned to their normal human forms by the element of magic's power wielded by Twilight Sparkle and her friends.

In My Little Pony Equestria Girls: Rainbow Rocks, Sunset Shimmer describes her transformed self as "a raging she-demon." In the same film, Twilight refers to this form as "that horrifyingly awful winged monster." Sunset also refers to her corrupted form as "a powerful demon" in a recap of the first two Equestria Girls movies that aired before the initial showing of Friendship Games on Discovery Family.

In various real-life cultures, demons are evil creatures that are often controlled by more powerful, malevolent beings, or have the power to control other beings themselves. They are commonly depicted in Western cultures as having red skin, wings, and horns.

A statue of a draconequus is a creature with "the head of a pony and a body of all sorts of other things." The statue happens to be Discord, whom Princess Celestia describes as "the mischievous spirit of disharmony." The word "draconequus" was coined by Lauren Faust, and it is composed of the Greek word drakon, meaning dragon, and the Latin equus, meaning horse. A Discord-like plushie is shown in Perfect Day for Fun.

A jackalope briefly appears in My Little Pony Equestria Girls: Friendship Games, when human Twilight Sparkle accidentally opened numerous portals to Equestria after she unintentionally stole Fluttershy's magic. Spike chases it when it leap from different rifts to rifts from Equestria and the human world.

A phoenix is mentioned by Sunset Shimmer in My Past is Not Today, and she also transforms in a phoenix-like appearance in the end of the short.

The Phoenix is derived from Greek mythology, often associated with the sun. According to Greek lore phoenixes are aviary beings that have survived for prolonged life-spans, measuring up to thousands of years. They accomplish this feat by bursting into flame during old age and then arise from their ashes into an earlier, youthful, stage of their lives. Phoenix is also one of the 88 modern constellations, it is named and modeled after the same mythical bird. The mythical fire-bird appears frequently in popular media and has been referenced several times in pop culture.

There are also several other mythological birds from different cultures that share similar properties with the phoenix.

Sirens are seen in the film My Little Pony Equestria Girls: Rainbow Rocks. Three sirens named Adagio Dazzle, Sonata Dusk, and Aria Blaze originally roamed Equestria spreading disharmony among ponies with their siren's songs. They fed off the ponies' negative energies to make their voices and magic more powerful with the intention of conquering Equestria. They were banished by Star Swirl the Bearded to the human world, where he surmised they would do no harm since there would be no magic in that world, unaware that later, Sunset Shimmer and Twilight Sparkle would bring Equestrian magic to that world.

During the film, the Dazzlings use their songs to control the students of Canterlot High School and advance to the final round in the Mane Event. They are eventually defeated by Twilight Sparkle, Sunset Shimmer, and the Rainbooms when their gem pendants are destroyed and they are stripped of their powers.

In Equestria, the sirens' appearance is more similar to that of a hippocampus, another mythical sea creature, rather than a traditional siren. In the human world, the Dazzlings' anthropomorphic forms possess translucent fins on their backs, like those on their true forms' front legs. Their siren forms are summoned as astral projections from their pendants and are used to battle, and ultimately weaken, the Rainbooms.

FIENDship is Magic Issue 3 "explores the secret origins of" the Sirens. [1]

The sirens come from Greek mythology, where they are depicted as creatures who resemble human females and often cause shipwrecks with their songs. 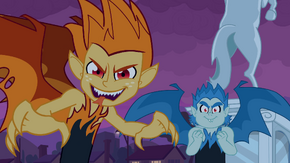 Retrieved from "https://equestriagirls.fandom.com/wiki/Creatures?oldid=50369"
Community content is available under CC-BY-SA unless otherwise noted.