The My Little Pony franchise is famous for cutie marks, unique picture-like symbols located on the ponies' flanks or haunches. The term is a play on "beauty mark", and it is also reminiscent of "quarter mark". The mark itself is positioned where livestock branding is usually performed. Cutie marks are often related to the personality, proclivity, or talent of the character.

Depiction in the films

Cutie marks come in a wide variety of shapes and colors in My Little Pony Friendship is Magic. Cutie marks are often a set of two or three objects or animals, and usually feature between one and three colors. For example, Rarity, Pinkie Pie, Fluttershy, and Applejack all have cutie marks with three objects and all of their designs have only two colors. One of the few ponies with a cutie mark with more than three colors is Rainbow Dash, whose rainbow lightning bolt has four. The other ponies with four- or five-colored cutie marks feature a more detailed image, so many of the colors are only different to allow for shading.

Earth ponies tend to have food-related or horseshoe marks, unicorns have astrological symbols, and Pegasus ponies have weather-related symbols. Music notes are another common mark and are present on all three types of background ponies. Occasionally, adult ponies appear without cutie marks, some instances of which have been explained by Lauren Faust as an oversight. [1] 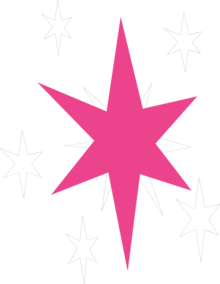 Retrieved from "https://equestriagirls.fandom.com/wiki/Cutie_marks?oldid=91938"
Community content is available under CC-BY-SA unless otherwise noted.