Derpy is a female human and a student from Canterlot High School.

Derpy makes a brief cameo in My Little Pony Equestria Girls. She appears twice in the cafeteria during the Equestria Girls song sequence, and also appears during the film's closing credits, again wall-eyed and dancing while holding a muffin.

In Rainbow Rocks, Derpy first appears in the gymnasium during the pre-CHS Musical Showcase band party. As Lyra Heartstrings and Sweetie Drops argue with Octavia Melody, Derpy watches them from a nearby chair eating popcorn. In the Battle of the Bands, Derpy participates in a band with "Blueberry Pie" and "Raspberry Fluff" and plays the musical saw.

At several moments throughout the film, Derpy argues with other students over who's going to win the Battle of the Bands, including "Captain Planet" and Micro Chips; during Under Our Spell, Lyra and Sweetie Drops hold her back while Bulk Biceps taunts her. A picture of Derpy appears during the closing credits slideshow.

Beginning with this film, Derpy's hair design is slightly altered.

In the musical short Life is a Runway, Derpy appears on the sidewalk as Rarity passes by. Rarity magically gives her a different outfit, and she models this outfit on a fashion runway. Derpy is last seen trying on shoes at Carousel Boutique.

In Friendship Games, Derpy appears as a member of the Canterlot High School Wondercolts. In one scene, she comforts Flash Sentry after "Twilight" runs away from him, and in another, she mingles with Crystal Prep Academy students during a welcome party in the CHS gymnasium. During the Friendship Games' Academic Decathlon, Derpy is eliminated in the chemistry round when a concoction she makes explodes in her face.

In Legend of Everfree, Derpy goes with her friends and classmates to Camp Everfree. She appears in various background shots throughout the film, comforting Flash Sentry after Sunset Shimmer runs away from him similarly to Friendship Games, she has a boat ride with Sandalwood, and she has one line of spoken dialogue.

Derpy appears on pages 42, 43 and 45 of My Little Pony Annual 2013, watching a soccer game between the Wondercolts and Shadowbolts.

"And I'm all out of arrows!"
— My Little Pony Equestria Girls: Legend of Everfree 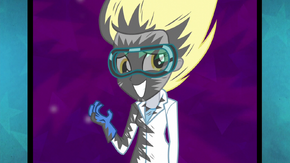 Retrieved from "https://equestriagirls.fandom.com/wiki/Derpy_Hooves?oldid=90588"
Community content is available under CC-BY-SA unless otherwise noted.