The Diamond Dog boys are male humans and students from Canterlot High School.

The Diamond Dogs are seen in Rainbow Rocks at the beginning of the film digging for diamonds outside of Canterlot High School, during the pre-Battle of the Bands party in the school gymnasium, and in the crowd of students during the Battle of the Bands itself. At one point, Spot makes a face at one of the eco-kids. They are eliminated in the first round of the competition by Photo Finish and the Snapshots.

In Player Piano, Rarity sees the Diamond Dog boys digging a hole in front of the school as she struggles to move a grand piano to the Canterlot High band room. She calls out to them and attracts them with her dazzling allure, but they appear more taken by her jewel-shaped hairclip.

At Rarity's request, the boys carry the piano to the band room, going so far as barreling through a dense gathering of students to get there. The boys watch as Rarity plays the keytar and, in the end, carry the piano for her once again to the school gym.

In Friendship Games,, the Diamond Dogs make background appearances sitting on the bleachers in the school gymnasium while attending the CHS pep rally. 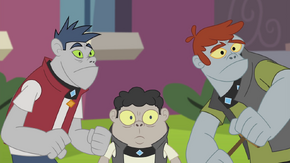 Retrieved from "https://equestriagirls.fandom.com/wiki/Diamond_Dogs?oldid=90589"
Community content is available under CC-BY-SA unless otherwise noted.