Start a Wiki
Fleur de Lis, or Fleur Dis Lee, is a female human and a student from Crystal Prep Academy.

Fleur de Lis appears in Friendship Games as a student of Crystal Prep Academy. She is first seen passing human Twilight Sparkle in the academy halls. During What More Is Out There?, she closes the window shade of a classroom that Twilight looks into while singing. Fleur Dis Lee mostly appears throughout the film as a Friendship Games spectator, and during Canterlot High School's welcome party for Crystal Prep, she offers a cupcake to Sandalwood. During Midnight Sparkle's reign of terror, she along with Rarity and other students almost fall into Canterlot, but is helped up by Indigo Zap and Lemon Zest.

In School of Rock, Fleur briefly appears at the Natural History Museum. In Display of Affection, she appears admiring the improved window display made by Sunset Shimmer.

In Rollercoaster of Friendship, Fleur appears with a brand new outfit in the beginning of the special at the mall. She subsequently appears as an Equestria Land patron waiting for the rollercoaster, in security camera video footage, and attending the park's light parade. 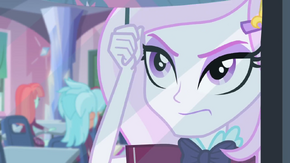 Retrieved from "https://equestriagirls.fandom.com/wiki/Fleur_de_Lis?oldid=72580"
Community content is available under CC-BY-SA unless otherwise noted.