Start a Wiki
Gloriosa Daisy is a female human and the hidden main antagonist-turned-supporting protagonist in My Little Pony Equestria Girls: Legend of Everfree. She is the director of Camp Everfree and the older sister of Timber Spruce.

Gloriosa Daisy's color scheme is similar to "Verity Lucky" from Friendship is Magic. Series supervising director Jim Miller has stated that she is a different character entirely.[1] According to Legend of Everfree assistant director Katrina Hadley, Gloriosa's transformed state was influenced by "aesthetic set up by" Rebecca Dart "for Midnight Sparkle".[2]

Gloriosa Daisy was first revealed in Hasbro promotional media for the Legend of Everfree film.

Depiction in Legend of Everfree

Gloriosa Daisy appears in the film as the cheerful director of Camp Everfree alongside her brother Timber Spruce. She promises the Canterlot High School campers a full week of fun activities, including ones never before offered by the camp. Despite her excitable behavior toward the campers, she shows slight animosity and disagreement toward her brother in silence.

Throughout the film, Gloriosa shows much devotion to the camp and its campers, trying to provide anything they might need at any given moment. However, she exhibits strange behavior that Sunset Shimmer notices, including tension with local businessman Filthy Rich, sneaking around the camp forest at night, and heated arguments with her brother. Sunset initially comes to the conclusion that Gloriosa and Timber are arguing because of Timber's desire to sell Camp Everfree. However, when Sunset's changing magic grants her the ability to see Gloriosa's memories, it is revealed that Gloriosa is under a considerable amount of stress trying to keep the camp from being bought out by Filthy Rich.

With Camp Everfree in danger of closing, Gloriosa despairs until she discovers a set of magical geodes in the nearby crystal cave; taking possession of five of the geodes grants Gloriosa magical plant-controlling powers. She uses these powers to try and save the camp, but she inadvertently causes several incidents around the campgrounds. This especially puts her at odds with Timber Spruce, who perceives the geodes' power as too dangerous and fabricates the legend of Gaea Everfree to cover for his sister's actions.

Even after being found out by Sunset Shimmer and Twilight Sparkle, Gloriosa remains determined to save her camp, and she uses the power of the two remaining geodes to transform and become stronger. She then uses her magic to enclose the entire camp in a giant dome of brambles, promising to protect the campers and everything she holds dear. When she is unable to be reasoned with, Twilight and her friends use their own magic to destroy her brambles and defeat her.

Upon being returned to normal, Gloriosa reconciles with her brother and apologizes to the campers for her misguided actions. With the help of Twilight and her friends' Crystal Gala fundraiser, she is able to keep Camp Everfree from closing. After the Rainbooms perform Legend You Were Meant To Be, she interrupts an intimate moment between Twilight and Timber to introduce Timber to some new camp donors who were friends with their parents.

While the kindhearted, warm natured Gloriosa Daisy is always trying her best to make Camp Everfree the best it can possibly be, there is definitely a lot more she is hiding behind her always upbeat smile.[3]

When first introduced, Gloriosa Daisy is depicted as very chipper, kind, helpful, and inspirational. She completely devotes herself to making Canterlot High School's time at Camp Everfree as enjoyable and memorable as possible. Her overeager consideration of others is usually punctuated by the catchphrase "I've got this!" However, Gloriosa drops her typical cheerfulness when she gets into disagreements with her brother Timber Spruce and faces off with greedy businessman Filthy Rich.

When Sunset Shimmer gains the ability to hear others' thoughts, Gloriosa's inner thoughts are revealed to be a stark contrast to her outward behavior. She bears much resentment toward Filthy Rich for showing up unannounced, and she gets so overwhelmed by dealing with Filthy and the campers' problems that her mind is filled with screams of frustration.

Gloriosa Daisy harbors a deep love and attachment for the camp that her great-grandparents founded. Because of this, Gloriosa becomes so desperate to save Camp Everfree that she resorts to using Equestrian magic to seal it off from the outside world. Her desire to protect the camp and its campers become so warped that she disregards the danger she exposes them to and ignores her brother's pleas to stop. 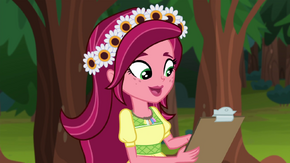 Retrieved from "https://equestriagirls.fandom.com/wiki/Gloriosa_Daisy?oldid=84515"
Community content is available under CC-BY-SA unless otherwise noted.