A My Little Pony annual was released in October 30, 2013. It is written by Ted Anderson and Katie Cook, drawn by Tony Fleecs and Andy Price and colored by Tony Fleecs. It is 48 pages long and features two stories based on the My Little Pony Equestria Girls movie. The first story, entitled The Fall of Sunset Shimmer, is 8 pages long and was originally published in the 2013 San Diego Comic Con version of Friendship is Magic, Issue #9. It tells the origin of Sunset Shimmer. The main story is about the Main Six struggling as freshmen at Canterlot High School.

My Little Pony Annual 2014 was released on September 24, 2014. It is written by Ted Anderson and drawn and colored by Ben Bates. The official synopsis states "Check out the original Power Ponies in action! When Mane-iac assembles an all-star team of villains, the Power Ponies may be outmatched! It will take a familiar face from Equestria to even the odds! Get ready for super powered adventure like you’ve never seen it!"

A 48-page My Little Pony: Equestria Girls Holiday Special comic was released on December 17, 2014. The official synopsis states "It's holiday time at Canterlot High! Sunset Shimmer is still getting used to life on campus, and her new friends. When mean rumors start to circulate, all signs point to Sunset as the source. Will she be able to find the true meaning of the holidays and clear her name?" 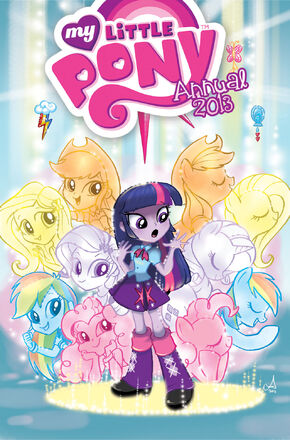 Retrieved from "https://equestriagirls.fandom.com/wiki/IDW_comics?oldid=41633"
Community content is available under CC-BY-SA unless otherwise noted.