Start a Wiki
Indigo Zap is a female human and a student from Crystal Prep Academy.

On the Friendship Games DVD/Blu-ray audio commentary, Ishi Rudell mentions that Indigo Zap's role in the movie was originally going to be Lightning Dust, with Josh Haber adding that Spitfire was also considered, but felt she "wasn't quite mean enough". Indigo Zap was created due to the writers wanting a new character.

Indigo Zap appears in Friendship Games as a student of Crystal Prep Academy and a member of its sports team, the Shadowbolts. She first appears on the bus to Canterlot High School, exhibiting much more excitement about winning the Friendship Games than her fellow competitors. She startles the human Twilight Sparkle with her high enthusiasm, and when the bus arrives, she shoves Twilight aside as she disembarks.

During Canterlot High's welcome party for Crystal Prep, Indigo Zap gets in both Sunset Shimmer and Rainbow Dash's faces.

Indigo Zap participates in the Academic Decathlon of the Friendship Games, being paired with Sugarcoat during the woodshop portion. They construct a two-story birdhouse that wins the event, and she gloats over her victory to Sandalwood and Micro Chips. During the spelling bee event, she is eliminated for misspelling the word "chauffeur."

In the Tri-Cross Relay, Indigo Zap is once again paired with Sugarcoat in motocross against Rainbow and Sunset. When the track is attacked by plant monsters from Equestria, Rainbow Dash saves Indigo Zap from being devoured. She recovers and gets back in the race, but Sunset eventually wins.

During the final event, Indigo Zap joins Principal Cinch and the other Shadowbolts in pressuring Twilight into releasing the magic accumulated inside her amulet, and she watches as the magic transforms Twilight into the monstrous Midnight Sparkle. As Midnight Sparkle opens multiple rifts into Equestria, Indigo Zap and her teammates help save their fellow students and the Wondercolts, saving Rarity with Lemon Zest's assistance.

Interesting enough, Indigo does not appear with her fellow Shadowbolts when they compete with the Rainbooms in a dance competition, or when they work together in a joint effort to win said competition to benefit both their causes.

Indigo Zap is ultra-competitive, a lot like Rainbow Dash, but unfortunately she seems to think teamwork and peer pressure go hand-in-hand.[1]

At least two Equestria Girls dolls of Indigo Zap were released as part of the toyline's Friendship Games lineup: a "Sporty Style" variant and a "School Spirit" variant. The Sporty Style doll is accessorized with wings, and it comes with a motocross helmet. Indigo Zap's description on the back of her School Spirit doll's packaging reads, "Nothing but the best!"

Indigo Zap has a similar personality to Rainbow Dash, in that she is extremely competitive and has an unbridled passion for winning, even by Crystal Prep Academy's standards. However, much like her schoolmates, she lacks sportsmanship and has a tendency to push others around, whether by accident or to gloat over her victories. When she believes Canterlot High School is cheating by using magic, she is willing to use peer pressure on Twilight Sparkle in order to help their team level the playing field. She later reveals a compassionate side to herself by rushing in to save her rivals when her team's actions put both schools in danger.

Indigo Zap: Are we gonna win?!?!
Twilight Sparkle: I... I don't know.
Indigo Zap: Wrong answer!! Try again! Are we gonna win?!?!
Twilight Sparkle: Um... I guess? I-It's just... I mean... I heard that CHS is doing well now. With their reputation. And, I mean, it's not better than ours, of course. But we can't let them do it, you know? Win, I mean? Right?
— My Little Pony Equestria Girls: Friendship Games

"We've got you!"
— My Little Pony Equestria Girls: Friendship Games

"I don't care what Principal Cinch says. It's been more fun getting to know everyone at CHS than it ever was playing against 'em."
— My Little Pony Equestria Girls: Friendship Games deleted scene 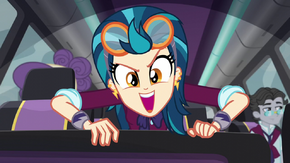 Retrieved from "https://equestriagirls.fandom.com/wiki/Indigo_Zap?oldid=90622"
Community content is available under CC-BY-SA unless otherwise noted.