The two are among other Shadowbolts to pressure human Twilight Sparkle into releasing magic from inside her amulet. Upper Crust is last seen talking with Sour Sweet and Dean Cadance at the end of the film. 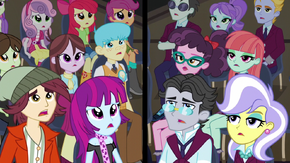 Retrieved from "https://equestriagirls.fandom.com/wiki/Jet_Set_and_Upper_Crust?oldid=90623"
Community content is available under CC-BY-SA unless otherwise noted.