Start a Wiki
Lemon Zest is a female human and a student from Crystal Prep Academy.

Lemon Zest appears in Friendship Games as a member of Crystal Prep Academy's sports team, the Shadowbolts. She sits next to Twilight Sparkle on the bus to Canterlot High School for the Friendship Games, sharing her deafeningly loud rock music with human Twilight Sparkle. She dances and mingles with Canterlot High's students during the welcoming party after Pinkie Pie helps lighten the tension between schools, but she returns to her hostile attitude after Principal Cinch intervenes.

Lemon Zest participates in the Friendship Games' first event, the Academic Decathlon, and she is selected as the Shadowbolts' six remaining competitors after reaching the penultimate spelling bee contest. She and Sunny Flare compete in the speed-skating portion of the Tri-Cross Relay, but they lose to Pinkie Pie and Rarity despite catching up to them after the Wondercolts' early lead.

Before the Games' final event, Lemon Zest and her team join Principal Cinch in pressuring Twilight into releasing the magic contained in her pendant-like device, intending to use it against Canterlot High. They all watch in horror as the magic instead transforms Twilight into Midnight Sparkle, who begins tearing open rifts to Equestria. Having a change of heart, Lemon Zest helps Indigo Zap pull Rarity, Fleur Dis Lee, and "Velvet Sky" from falling through a giant rift in the ground.

After Twilight returns to normal, Lemon Zest and her team turn on Cinch for causing Twilight's transformation, and they celebrate their shared victory with the Wondercolts. She chats with DJ Pon-3 before the Crystal Prep students leave.

In Dance Magic Lemon Zest and her friends have met Rarity at the Canterlot Mall, signing the Rainbooms up for the mall's dance competition, which Lemon is surprised Rarity is having the Rainbooms take part in. When Rarity mentions her ideas for the Rainbooms' submission, Lemon and the other Shadowbolts steal her idea to use as their own. When Rarity and Twilight confront them later at the CPA dance studio, it looks as if the Shadowbolts have Rarity dead to rights since they say they've already submitted their entry, and if Rarity still has the Rainbooms use the same idea, people will think the Rainbooms copied the Shadowbolts. However, it is revealed later that while they have the moves, the Shadowbolts have been relying on Sapphire Shores' music and don't have an original song to use themselves, leaving them worried that they will let their classmates down. Rarity offers them a compromise, working together with the Rainbooms as the Crystal Rainbooms to film the Dance Magic music video that wins the competition, allowing the Shadowbolts to raise enough funds for the yacht trip, much to Lemon's excitement as she exchanges a high-five with Applejack before heading off to celebrate with something to drink with the other Shadowbolts and Rainbooms.

In Mirror Magic, Lemon Zest briefly appears performing with the Crystal Rainbooms in the Dance Magic music video as it is being played at the Canterlot Mall.

Lemon Zest is a bit of a drill sergeant. She's focused on her teammates performance to help them win, but doesn't care very much about connecting on a personal level.[1]

At least two Equestria Girls dolls of Lemon Zest were released as part of the toyline's Friendship Games lineup: a "Sporty Style" variant and a "School Spirit" variant. The Sporty Style doll comes with roller blades.

Lemon Zest demonstrates the behaviour of a wild, obnoxious rocker girl. She enjoys listening to loud music on her headphones and forces Twilight to listen to it at one point. Like most of Crystal Prep's students, Lemon Zest is fiercely competitive and obsessed with proving her school's superiority over Canterlot High School through any means necessary. Despite this, she happily socializes with Canterlot High's students during Pinkie Pie's party, and she later helps save several students from both schools when Midnight Sparkle's rampage puts them in danger. 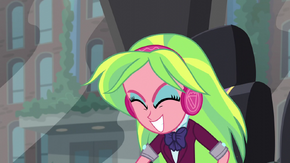 Retrieved from "https://equestriagirls.fandom.com/wiki/Lemon_Zest?oldid=84517"
Community content is available under CC-BY-SA unless otherwise noted.