Lyra Heartstrings is a female human, a student from Canterlot High School, and one of the supporting characters in My Little Pony Equestria Girls.

In My Little Pony Equestria Girls: Rainbow Rocks, Lyra Heartstrings appears as a student of Canterlot High School. As a result of the Dazzlings' hypnotic singing, they frequently argue with their fellow students, including Octavia Melody.

In the CHS Musical Showcase, Lyra and Sweetie Drops perform a piano duet—their vocals are obscured by the Dazzlings' Under Our Spell—but they are eliminated from the competition in the second round by Trixie and the Illusions. Near the end of Under Our Spell, they hold Derpy back from fighting with Bulk Biceps.

In the Rainbow Rocks musical short Life is a Runway, Lyra appear on the sidewalk as Rarity passes by. Rarity magically gives her different outfits, and she models this outfit on a fashion runway. Lyra is last seen with Sweetie Drops browsing clothes at Carousel Boutique.

In Friendship Games, Lyra Heartstrings appears as a member of the Canterlot High School Wondercolts, often seen in Flash Sentry's company. During a welcoming party for Crystal Prep Academy in the CHS gymnasium, Lyra mingles with Upper Crust.

During the Friendship Games' Academic Decathlon, Sweetie Drops is partnered with Flash Sentry in the home economics round, where they bake a loaf of bread instead of a cake, and Lyra and Sweetie Drops are partnered together in the woodshop round.

A Rainbow Rocks doll of Lyra Heartstrings was released in 2015 for the Rainbow Rocks neon single, with a pair of red glasses. Her description in the back of the packaging reads, "Rockin' Style: Cool rainbow accents."[1]

Lyra appears alongside her counterpart on the WeLoveFine-licensed T-shirt "EQ Lyra Believe". Her appearance on the T-shirt predates her appearance in Rainbow Rocks. 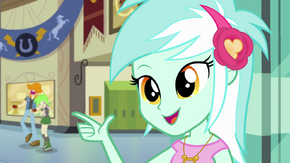 Retrieved from "https://equestriagirls.fandom.com/wiki/Lyra_Heartstrings?oldid=90595"
Community content is available under CC-BY-SA unless otherwise noted.