Start a Wiki
The Mane Six is a group of six ponies that appear in the first two Equestria Girls films. They primarily serve as the supporting characters in My Little Pony Equestria Girls.

In My Little Pony Equestria Girls, the rest of the Mane Six accompany Twilight Sparkle to her first princess summit in the Crystal Empire, and they witness Sunset Shimmer steal Twilight's crown. In an alternate world, their human counterparts appear as high school students. At the end of the film, Pinkie Pie accurately guesses the details of Twilight's relationship with Flash Sentry on "a hunch."

The rest of the Mane Six briefly appear in the sequel My Little Pony Equestria Girls: Rainbow Rocks at Twilight's cahe idea to transfer the magic of Princess Celestia's book into the Crystal Mirror.

Rainbow Dash appears as a pony in the film's blooper reel giving her human counterpart a ride.

At the end of the gag reel, Pinkie comes out of the portal and trades places with the human Pinkie Pie.

Applejack: Hoo-wee! Your very first princess summit. You must be over the moon, Twilight.

Pinkie Pie: You're 'nervicited'! It's like you wanna jump up and down and yell "YAY ME!!" But you also wanna curl up in a teeny-tiny ball and hide at the same time! We've all been there!
Fluttershy: I'm there almost every day.

Rarity: You are a princess now, Twilight. Embrace it! I'm telling you, if I had a crown like that, I would never take it off. Why, I'd sleep in the thing.

Pinkie Pie: Oooh! I'm so 'nervicited'!
Applejack: You do realize that's not a real word, right?

Fluttershy: What is it, Twilight?

Rarity: How is that even possible?

Pinkie Pie: Not the sirens! [whispering loudly to Fluttershy] I don't actually know what that is!

Fluttershy: I don't think I like this story very much.

Applejack: But Star Swirl must have sent them there ages ago. How come they're just surfacin' now?

Rainbow Dash: I hate to burst your bubble, Twilight, but the connection between their world and Equestria will still be totally cut off for a super long time.
Pinkie Pie: Okay, first of all, if there was bubble-blowing going on, why wasn't I told about it?! And secondly, if the connection is totally cut off, how was Sunset Shimmer able to get a message to Twilight?

Pinkie Pie: Yeah, I get that a lot. [to Rainbow Dash] Now about those bubbles...

Main cast: Ahhhhh...
Applejack: Don't suppose we could join you this time around? 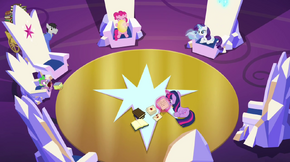 Retrieved from "https://equestriagirls.fandom.com/wiki/Mane_Six?oldid=96048"
Community content is available under CC-BY-SA unless otherwise noted.