Maud appears in Rainbow Rocks during a slumber party held by the Rainbooms. She is seen in the kitchen of Pinkie Pie's house getting Boulder something to "eat." Twilight Sparkle and Sunset Shimmer share their disbelief that she is related to Pinkie. She briefly appears again in the crowd at the end of the film when Trixie makes her getaway.

In the Legend of Everfree blooper reel, Maud appears in the scene where Sunset Shimmer speaks with Flash Sentry. She takes the small pebble that Sunset picks up, revealed to be Boulder, and feeds him crackers while walking off-screen.

In the My Little Pony: Equestria Girls Holiday Special comic, Maud appears on pages 9 and 48. 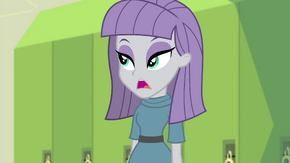 Retrieved from "https://equestriagirls.fandom.com/wiki/Maud_Pie?oldid=90597"
Community content is available under CC-BY-SA unless otherwise noted.