Other than toys, Hasbro produces and licenses an assortment of Equestria Girls branded products. Most products were released with the original series.

For the gallery section, see Merchandise/Gallery#Apparel.

Online store WeLoveFine.com started selling licensed shirts and accessories, including My Little Pony Equestria Girls. Many of these designs are made by fans and licensed by Hasbro.

IDW Publishing are publishing Hasbro-licensed full-color comic book series titled My Little Pony: Equestria Girls with editor Bobby Curnow and a host of artists. The comic is done in cooperation with the series' staff and takes place within the series' continuity.

Equestria Girls art prints are available from the online store WeLoveFine.com. Many of the designs printed on its Equestria Girls products are made by fans and only licensed by Hasbro.

Many storybooks have been licensed or published by Hasbro. Some are sold individually in print or as e-books for the Amazon Kindle, the Barnes & Noble Nook, Google Play, or iOS.

Equestria Girls chapter books are published by Little, Brown and Company in print and e-book formats. Each features a different character and has an original story that ties in to the series. 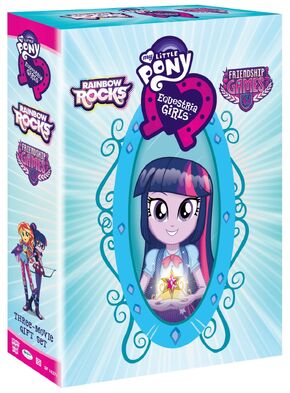 Retrieved from "https://equestriagirls.fandom.com/wiki/Merchandise?oldid=50022"
Community content is available under CC-BY-SA unless otherwise noted.