Nick Confalone stated on Twitter in June 2019 that the music festival arc in My Little Pony Equestria Girls: Better Together (season 2) leads up to "a REALLY fun special"[6] "at the end".[7]

The special aired on Discovery Kids in Mexico on June 26, 2019, thirty-one days ahead of its scheduled premiere on Discovery Family in the United States.[8]

"The Starswirled Music Festival is finally here, and the Mane 7 are going to get their 'glamping' on! Sunset and Pinkie are the most excited to see their favorite band perform but when Equestrian Magic causes a 'Groundhog Day' inspired time loop to start, Sunset gets stuck reliving 'Festival Day 1' forever!"[9]

The Mane 7 arrive at the Starswirled Music Festival, a two-day event dedicated to the most popular musical acts. Sunset Shimmer and Pinkie Pie are especially excited to see PostCrush, a pop music duo consisting of Kiwi Lollipop (K-Lo) and Supernova Zap (Su-Z) who have reunited for a one-night-only concert.

The next morning, on the first day of the festival, Sunset wakes up to Rainbow Dash accidentally hitting her with a paddle and Applejack telling jokes to Twilight and Fluttershy over breakfast. On their way to the festival, she steps in a mud puddle and briefly gets stuck in a slow-moving security line at the festival entrance. Once inside, Sunset has everything planned out to secure a front-row seat for PostCrush's concert, but Pinkie gets her continuously sidetracked by checking out several festival activities and exhibits.

That night, shortly before the concert, Sunset gets dragged along when Pinkie Pie feverishly goes to try Puffed Pastry's specially-made churros, causing both of them to crash into and destroy the churro cart. This results in both of them getting kicked out of the festival just as the concert starts. Back at Rarity's RV, Pinkie apologizes to Sunset for ruining their only chance to see PostCrush, and Sunset bitterly says if given the chance to do the day all over again, she would do it alone.

On a nearby hill, Sunset watches the music festival from afar and laments missing out on PostCrush. All of a sudden, a wave of Equestrian magic washes over her. The next morning, Sunset expects to begin the second day of the festival. But when Rainbow hits her with a paddle and Applejack tells jokes to Twilight and Fluttershy at breakfast, she realizes that day one of the festival has started all over.

On the way to the festival, Sunset steps in the same mud puddle and gets stuck in the same slow-moving security line as before. Also like before, Pinkie gets sidetracked from seeing PostCrush by checking out various festival activities, and both Sunset and Twilight struggle to keep up with her. When Sunset accurately predicts parts of the day that she already experienced, Twilight suggests that she might be caught in a time loop. Sunset believes Equestrian magic is at work, giving her another chance to see PostCrush.

Sunset tells Pinkie to focus on PostCrush in order to avoid what happened last time, but Pinkie is unable to control her hunger and goes after Puffed Pastry's churros again. Despite Sunset's efforts to stop her, the end result is the same: the churro cart is destroyed, and Sunset and Pinkie get kicked out of the festival just before PostCrush goes on stage.

The next morning, the time loop resets again, and Sunset is given yet another chance to see PostCrush. This time, she goes to the festival ahead of her friends, beating the long security lines. When Pinkie Pie tries to catch up with her, she avoids her and runs away, unintentionally hurting Pinkie's feelings. In the end, Sunset is finally able to see PostCrush's concert from the front row.

Back at the Mane 7's camp, Sunset expresses to her friends how perfect her day was, but some of them are upset with her for abandoning Pinkie Pie, and despite Pinkie's attempts to play off Sunset ditching her, she is clearly heartbroken. Sunset is too euphoric from having finally gotten to see PostCrush that she disregards Pinkie's hurt feelings. Unfortunately, she is horrified to discover the next morning that the time loop has still not ended, and she is still trapped on the first day of the festival.

After experiencing the same day's events for over two weeks, Sunset tries a different way to break the time loop. She drives Rarity's RV away from the festival in the middle of the night, but the RV soon breaks down. She tells her friends about her situation, believing that because the time loop started when she failed to see PostCrush, finally seeing them would end it. Twilight, however, believes something else to be the cause, and Pinkie Pie suggests reaching out to Princess Twilight in Equestria for help.

The next morning, Sunset sends a message to Princess Twilight with her magic journal. In her reply, Twilight believes the source of the time loop to be another long-lost Equestrian artifact called the Time Twirler, which allows its user to rewind time. With this information, Sunset resolves to find the Time Twirler's wielder and finally bring the time loop to an end.

Later that evening, Sunset and her friends try to track down the Time Twirler and its user, but Sunset has not noticed anyone or anything out of the ordinary over the course of the time loops. Suddenly, she overhears some festival-goers singing song lyrics such as "every day's the same" and "round and round and round", and one of them points her in the direction of a musical performance. Much to the Mane 7's shock, the Dazzlings are performing, singing their song Find the Magic.

From the Dazzlings' lyrics, Sunset suspects they are the cause of the time loop, but a big security guard prevents her and her friends from going backstage to confront them. Pinkie Pie tries to talk her way past the guard, striking up a conversation about cats, but she gets the guard so angry that he kicks the Mane 7 out of the festival. Pinkie feels guilty for messing up so badly, but Sunset is certain that they will get it right next time.

The next morning, time gets reset again, and Sunset takes Pinkie Pie and immediately heads toward the Dazzlings' concert. Remembering the security guard and Pinkie's conversation about cats during the previous loop, Sunset gives the guard a cute kitten. Moved by Sunset's gesture, the guard allows her and Pinkie to go backstage. They hide behind some music equipment just as the Dazzlings come out of their tour van. When Sunset overhears them talking about "the loop", she believes her suspicions about them are confirmed.

As the Dazzlings head into the festival, Sunset sneaks onto their van to look for the Time Twirler, instructing Pinkie Pie to keep a lookout. While doing so, however, Pinkie gets distracted by Puffed Pastry's special churros yet again and cannot resist the urge to get some. Sunset is unable to find the Time Twirler, and when the Dazzlings return, they catch her snooping around in their van.

When Sunset confronts the Dazzlings about the time loop, they have no idea what she is talking about; their earlier mention of "the loop" was referring to looping the vocals in their song. Sunset even uses her geode powers to read Adagio's mind to determine whether or not they are telling the truth. As the Dazzlings mock Sunset over her dilemma, Sunset loudly expresses how frustrated she is with Pinkie Pie ruining her every attempt to break the time loop. Pinkie hears this and runs off in tears.

Sunset catches up with Pinkie and apologizes for hurting her feelings. Still heartbroken at Sunset's words, Pinkie Pie decides to stay out of Sunset's way so that she can enjoy herself at the festival. Realizing how selfish she has been, Sunset uses the next iteration of the time loop doing whatever Pinkie Pie wants: winning and riding a tandem bicycle, exploring the neon-lit hedge maze, taking photo booth pictures, and getting churros without destroying the cart. Sunset tells Pinkie that throughout all her attempts to have a perfect day at the festival, it was never truly perfect because they were not enjoying it together.

When Puffed Pastry's delivery boy suddenly quits due to a broken-down delivery cart, Sunset and Pinkie Pie step in to deliver churros to PostCrush in his place. At PostCrush's tour bus, Sunset and Pinkie meet Kiwi Lollipop and Supernova Zap. When Su-Z comments on the peculiarity of seeing two girls instead of their "usual delivery guy", K-Lo silences her, and Sunset Shimmer gets immediately suspicious. Before K-Lo and Su-Z can excuse themselves to get ready for their concert, Sunset asks to shake K-Lo's hand, and she reads K-Lo's mind.

In K-Lo's memories, it is revealed that K-Lo and Su-Z found the Time Twirler on the first night of the music festival. Wanting their comeback concert to be absolutely perfect, they used the device to turn back time whenever something went wrong or if the concert did not meet K-Lo's extremely high standards of perfection. Sunset tells K-Lo and Su-Z that absolute perfection is impossible to achieve, but they refuse to listen to reason.

Sunset tries to think of a way back into the music festival before K-Lo and Su-Z use the Time Twirler again—upon which the day will reset and she will be banned from the festival for good and unable to try another time. Using one of Puffed Pastry's rock-hard churros, she and Pinkie attempt to break into the festival by force, but the security guard suddenly opens the door. Recalling Sunset's respect for his security line earlier that day, he decides to let her back in to see the concert. Sunset thanks the security guard for his kindness, and she and Pinkie head off to stop PostCrush and deactivate the Time Twirler.

In a room underneath the stage, K-Lo and Su-Z prepare to go on. Su-Z says she is tired of reliving the same day over and over, but K-Lo refuses to stop until their concert is absolutely perfect. Sunset and Pinkie suddenly burst in and demand they hand over the Time Twirler. When they refuse, a physical struggle for the device ensues, to the point at which the floor rises up and carries the four of them to the stage above. In the resulting confusion, Sunset smashes the Time Twirler on the ground, finally breaking its spell.

K-Lo falls to her knees, lamenting her now-ruined chance to rise back to stardom. Much to her surprise, however, the crowd cheers for PostCrush. Sunset explains to K-Lo that their fans do not care about perfection; they just want to see her and Su-Z play music and have fun. K-Lo and Su-Z realize that they did have fun together before the pressures of perfection drove them apart. Deciding to give up on their goal of absolute perfection, K-Lo and Su-Z perform their song True Original—with Sunset Shimmer and Pinkie Pie on backup. The concert ends with all four of them taking a group selfie.

The next morning, the time loop is finally broken, and Sunset and Pinkie wake up on day two of the Starswirled Music Festival. When Pinkie asks Sunset what she wants to do, Sunset answers:

"Whatever the day brings us. Yesterday was the longest three weeks of my life!"
— Sunset Shimmer 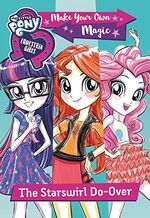 Add a photo to this gallery

Retrieved from "https://equestriagirls.fandom.com/wiki/My_Little_Pony_Equestria_Girls:_Sunset%27s_Backstage_Pass?oldid=92273"
Community content is available under CC-BY-SA unless otherwise noted.