Octavia Melody is a female human and a student from Canterlot High School.

Octavia is seen during the Dazzlings' song. During the Battle of the Bands, she is pitted against the Rainbooms, but is eliminated. She also has one speaking line in the film, after Sunset Shimmer disrupts Rainbow Dash's singing in front of the students.

An Equestria Girls doll of Octavia, displayed at the 2014 American International Toy Fair, was scheduled to be included in the Rainbow Rocks line.[1] She was later released accompanying a brushable toy of her pony counterpart.

"I knew she was still trouble!"
— My Little Pony Equestria Girls: Rainbow Rocks

"I am a classically trained musician. It should have been me!"
— My Little Pony Equestria Girls: Rainbow Rocks - The Mane Event 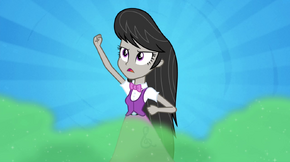 Retrieved from "https://equestriagirls.fandom.com/wiki/Octavia_Melody?oldid=90599"
Community content is available under CC-BY-SA unless otherwise noted.