The My Little Pony brand describes its characters as ponies. The brand's toys, as the name suggests, usually consist of small colorful plastic ponies. The characters on the various My Little Pony television shows and movies are depicted with varying degrees of fantasy elements, like the ability to speak, fly, and use magic.

My Little Pony Friendship is Magic divides ponies into three main "types" and other two types in the first episode: Earth ponies, Pegasi, and unicorns.

Earth ponies don't have Pegasus wings nor unicorn horns, and therefore most closely resemble real ponies. They are the kind first introduced by the My Little Pony brand. The main cast of the show Friendship is Magic features two Earth ponies: Applejack and Pinkie Pie.

Pegasi, or "Pegasus ponies", are ponies with wings and flight abilities – in the fashion of the legendary Pegasus. Pegasi can usually fly and interact with clouds. The main cast of the show features two Pegasi: Rainbow Dash and Fluttershy.

Unicorns feature a magical horn on their foreheads, and usually have magical abilities. They are always called "unicorns" in the show, but the wiki also uses the term "unicorn ponies" for consistency with "Pegasus ponies" and "Earth ponies", since unicorns are also a type of pony. The show's main cast initially features two unicorns: Rarity and Twilight Sparkle, but Twilight gains wings in Friendship is Magic episode "Magical Mystery Cure", thus becoming an Alicorn.

Princess Celestia, Princess Luna and Princess Cadance are the commonly known Alicorns for both series, aside from Twilight Sparkle. This meant that Twilight was now able to harness the magical powers of the unicorns, the flight abilities of the Pegasi, and the strength of a good, true heart of an Earth pony. 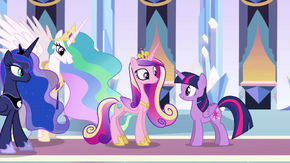