Twilight Sparkle is an alicorn princess, a temporary student at Canterlot High School and a protagonist in My Little Pony Equestria Girls. She represents the element of magic.

Twilight Sparkle is the main protagonist in Equestria Girls. In the film, Twilight and Spike teleport to a human world to retrieve the stolen element of magic crown from Sunset Shimmer. Twilight and Spike enter Canterlot High and meet the human counterparts of their Ponyville friends. When Twilight discovers that Principal Celestia will award the crown to the Princess of the Fall Formal dance, she decides to run for Princess. She wins, despite a smear campaign orchestrated by Sunset Shimmer, and receives the crown at the dance.

However, Sunset Shimmer takes the crown by force and transforms into a rage-filled demon. She hypnotizes the students, whom she plans to use as an army to invade Equestria. When she attacks Twilight, Twilight's friends shield her and inadvertently activate the magic of friendship. They defeat Sunset Shimmer, who immediately becomes remorseful for everything she's done.

After the dance, Twilight and Spike return to Equestria. Twilight feels more confident about being a princess than before. She bumps into Flash Sentry, who she encountered several times in the human world, and blushes. Twilight's friends tease her for having a crush, but she denies it.

Twilight is also a main protagonist in Rainbow Rocks. In the film, the reformed Sunset Shimmer uses a magical book to write a note to Princess Celestia that magically appears in a book in Celestia's library. When Twilight sees this book, she senses that her CHS friends need her help, so she and Spike go through a modified version of the Crystal Mirror to return to the human world.

Once there, Twilight is told of the situation at CHS while also revealing her new status back home in Equestria as the Princess of Friendship. Twilight learns that her human friends are still able to assume half-pony forms after she returned home with the element of magic. She attempts to take out the Dazzlings at the pre-Battle-of-the-Bands party immediately, only to find the magic of friendship not working. Believing that they need a counterspell song to counteract the Dazzlings' song, Twilight struggles to come up with one as the Rainbooms battle their way to the finals to buy Twilight more time.

When they are dropped into the basement of the amphitheater stage by Trixie and the Illusions, under encouragement from the Dazzlings, Twilight gives up hope, only to discover that the reason the magic of friendship never worked was because the Rainbooms had allowed a few minor suggestions that they could not agree upon to drive a rift into their friendships. That caused it to become warped into something the Dazzlings could feed upon to regain their powers, and render it powerless.

Once the Rainbooms realize their error and make amends, together with DJ Pon-3, who was immune to the Dazzlings' spell thanks to her headphones, and Sunset lending her strength to them, Twilight and the band are able to overpower and destroy the Dazzlings' power sources, stripping them of their dark powers permanently, and leaving them to be forced off the stage in disgrace by the angry students and faculty.

Afterward, Twilight returns home to Equestria, but thanks to how she was able to re-energize the portal, she can come back to visit anytime she wants. Sunset also takes it upon herself to write her friendship reports into her old journal for Twilight to read back in Equestria.

After the credits roll, the human world's Twilight pieces together some strange events that occurred at Canterlot High School. She talks to her non-sentient dog Spike. This version of Twilight looks extremely different as she has her hair in a bun and wears thick black glasses.

Twilight appears in Shake Your Tail, where she helps her friends come up with a theme for a dance at Canterlot High. She comes up with a classroom theme, but that idea does not sit well with the others. At the dance, she performs with the Rainbooms. In Perfect Day for Fun, she and her friends enjoy the Canterlot High carnival. At one point, she gives Fluttershy a Discord plushie, but Fluttershy smacks it with a Whack-a-Mole hammer. They finally reunite at the photo booth before leaving to perform on the stage as the Rainbooms. In one photo montage, Twilight and Applejack drag a crying Fluttershy into a haunted house. However, Applejack and Twilight end up getting scared themselves while Fluttershy shows indifference towards it. The final scene shows Twilight and her friends looking through the photos on top of a ferris wheel. In the novelization, Twilight is actually still in Equestria and, in the end, imagines that she is performing with her Canterlot High friends.

Twilight also appears in the encore shorts My Past is Not Today and Friendship Through the Ages. In the former, she briefly appears in a flashback offering her hand to Sunset Shimmer after her defeat. In the latter, she performs the titular song with the Rainbooms, singing the first verse on piano.

Twilight is a minor character in the film.

In the third film, Twilight's human counterpart is revealed to be attending Crystal Prep Academy and is a member of the Wondercolts' rival, the Shadowbolts. This version of Twilight is portrayed as being rather awkward and curious.

Twilight from Equestria does not appear until the very end of the film, where she explains that she did not respond to Sunset's letters because she was dealing with a time travel loop, referring to the events of Friendship is Magic season five finale. She calls it the "strangest thing that ever happened to [her]". She then notices her human doppelgänger and demotes it to being the second strangest. Human Twilight only sheepishly waves at her counterpart from Equestria.

In a deleted scene on the DVD, Sunset meets Twilight at the Sweet Shoppe to talk to her. Sunset tells Twilight that she has a desire for more than intramural sports and is actually considering returning to Equestria. Twilight assures Sunset that the portal is always open for her to return. Later, the waitress arrives with Twilight's order, but she only has Equestrian bits as money. Thus, Sunset pays for her, saying she can pay her back when she comes to Equestria.

Twilight is only mentioned throughout the film.

While Princess Twilight does not appear in Mirror Magic, she is alluded to throughout. In the beginning, Sunset writes to her in her journal, but unfortunately she runs out of pages. When Sunset returns to Equestria, Starlight Glimmer gives Sunset a new journal in Twilight's absence, saying she and the rest of the Mane Six were called away to solve a friendship problem. Starlight then follows Sunset through the Crystal Mirror, claiming that Twilight won't mind. At the end of the special, Twilight writes Sunset back in her replacement journal and gives Starlight permission to stay in the human world for a few more days.

Twilight, in her human form, plays supporting roles in Make Up Shake Up, A Photo Booth Story, and Raise This Roof, all of which take place during the first film. She also appears in photographs in Rainbow Dash's bedroom in Leaping Off the Page.

In the hour-long special Forgotten Friendship, Twilight helps Sunset solve the mystery of her friends' memories being erased, and she eventually traces the cause to a magical artifact that Clover the Clever buried in the human world called the Memory Stone. At Twilight's encouragement, Sunset also reconciles with Princess Celestia.

Twilight's human form also appears in flashback twice: first during We've Come So Far which shows her pulling the remorseful Sunset from the hole in the ground. And the second time, she and Flash Sentry pass by an unnoticed Wallflower Blush during the Fall Formal.

In Spring Breakdown, Twilight appears at the Castle of Friendship hanging a painting with Spike in the throne room. When Sunset arrives with human Twilight and Rainbow Dash in pony form, she tells them stories about her and her friends' adventures in Equestria. She also lends them the Staff of Sacanas to quell a magic lightning storm after some of the Storm King's magic leaks into the human world. At the end of the special, Twilight appears again when Sunset brings the stranded cruise passengers to Equestria.

Princess Twilight appears in the special explaining to Sunset from the journal about the Time Twirler.

Twilight Sparkle isn't exactly feeling like herself these days. Still, the brains of most operations, this perky princess won't let anything get into her way. Even if that means transporting to another universe to reunite old friends, expose Canterlot High's most feared villain, and unite the masses before the Fall Formal so she can take home the crown. But it's all in a day's work for Twilight Sparkle, and she will use all the skills she has: her determination, her charm, and her intelligence to get the job done. Well, that, and a little bit of magic![3]

When her friends need her, no one shines like Twilight Sparkle. As lead singer for the Rainbooms, she works to get everyone rockin’ to the same rhythm, so that harmony reigns supreme at Canterlot High.

Twilight Sparkle's superstar style sets her apart as the lead singer of The Rainbooms. With the magic of friendship on her side, she helps her friends defeat the villainous band, The Dazzlings, before they take over Canterlot High.[4]

In the Minis - Pinkie Pie's Slumber Party digital shorts, Twilight Sparkle is featured in her own short.[5][6]

"Just because I have this crown and these wings, it doesn't mean I'll be a good leader!"
— My Little Pony Equestria Girls

"Yes, but I've also seen what you've been able to do here without magic. Equestria will find a way to survive without my Element of Harmony. This place might not if I allow it to fall into your hands. So go ahead, destroy the portal. You are not getting this crown!"
— My Little Pony Equestria Girls

"The crown may be upon your head Sunset Shimmer, but you cannot wield it, because you do not possess the most powerful magic of all: the magic of friendship!"
— My Little Pony Equestria Girls

"I can't believe all this tension was happening right under my nose and I didn't realize it. I'm supposed to be the one with all the answers. And all I've done since I got here is let you down."
— My Little Pony Equestria Girls: Rainbow Rocks

"I’m the Princess of Friendship now, and lots of ponies are going to be looking to me to solve their problems. But it was foolish of me to think that I should have all the answers. What I do have are good friends who will always be there to help me find them."
— My Little Pony Equestria Girls: Rainbow Rocks - The Mane Event

"I'm so sorry I didn't get here sooner! I didn't get your messages until just now because I was caught in this time travel loop and honestly, it was the strangest thing that's ever happened to me!"
— My Little Pony Equestria Girls: Friendship Games

"Please! ... Don't Take This Away From Me."
— My Little Pony Equestria Girls: Forgotten Friendship 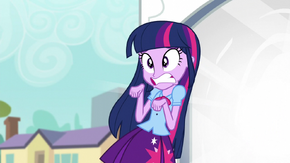