Principal Celestia is a female human, the principal of Canterlot High School, and one of the supporting characters in My Little Pony Equestria Girls.

In the alternate world that Twilight Sparkle travels to in the film, Celestia appears as the principal of Canterlot High School. When Twilight's stolen crown ends up in Fluttershy's hands, she turns it over to Principal Celestia for safekeeping. Twilight goes to Principal Celestia about this matter, and Celestia explains that the only way for Twilight to get the crown to be voted Princess of the Fall Formal.

At the Fall Formal proper, Principal Celestia congratulates the school students for fixing up in the gymnasium after Snips and Snails trashed it earlier, and she announces Twilight Sparkle as the winner. She later commends Twilight for her role in defeating Sunset Shimmer.

In Rainbow Rocks, Principal Celestia first appears walking into the gymnasium with Vice Principal Luna to check on the students making signs and posters for the CHS Musical Showcase. She expresses hope that the showcase will be even better than the Fall Formal, inadvertently reminding the students of Sunset Shimmer's actions.

After the Dazzlings' arrival at the school, the Rainbooms try to warn Celestia and Luna about their true nature, but by the time they are reached, they have already been hypnotized by the sirens' song. Celestia and Luna later serve as the judges for the Battle of the Bands, and the Dazzlings hypnotize them and coerce their decision in favor of the Rainbooms instead of Trixie and the Illusions.

Principal Celestia briefly appears in the animated short Music to My Ears. When she catches DJ Pon-3 listening to music on her headphones in the school hallway, she confiscates the headphones and gestures for DJ to get to class.

In Friendship Games, Principal Celestia and Vice Principal Luna attempt to raise school spirit with a pep rally before the Friendship Games take place, but they are unsuccessful until Rainbow Dash sings an uplifting song and ponies up.

Later, she gives Principal Cinch, the headmistress of Crystal Prep Academy, a tour of CHS, during which she sees a girl that looks like Twilight Sparkle. Cinch refers to this Twilight as her student, and Celestia believes her to be Twilight's twin sister until Pinkie Pie confusingly explains that she is the Twilight from the human world.

Celestia judges the Friendship Games with Luna, Cinch and Dean Cadance. She denies any involvement of magic in the games, putting her in direct opposition with Cinch. When an incident results in Twilight transforming into Midnight Sparkle, Cinch demands Celestia's forfeit, but Celestia holds her own against the duplicitous CPA principal. In the end, she declares both schools winners and welcomes the Twilight of Crystal Prep as Canterlot High's newest Wondercolt.

In Legend of Everfree, Celestia and Luna take their students on a trip to Camp Everfree after they successfully raised enough money for it. When at the camp and meeting Gloriosa Daisy and Timber Spruce, they ask about the camp gift, revealing the camp's sundial to be their gift during their time at the camp. She also gives support on giving a new dock for future campers. During their stay, Celestia makes sure all her students are alright, such as when Applejack heaves Rarity up the rock-climbing wall with her newfound super-strength, and when Rarity knocks Applejack into the lake with her new force field generating powers. When the camp is closed off from the outside by a transformed Gloriosa, Celestia and Luna take many of the students to shelter in the mess hall. After the Rainbooms manage to defeat Gloriosa and gain control of the geodes that gave Gloriosa her power, Celestia and Luna confront a repentant Gloriosa, who now is ready to surrender Camp Everfree to be razed by Filthy Rich due to being unable to pay off the camp's debt, but Celestia refuses to let the camp, which means so much to her, Luna, and campers of both the past and present, be destroyed, and at the suggestion of the Rainbooms, they hold a Crystal Ball fundraiser to earn the funds to pay off the camp's debt. The Crystal Ball is a success and Camp Everfree is saved, but unknown to Celestia, the pedestal back at Canterlot High School where the Wondercolt statue used to stand on top of has begun to leak magic from Equestria into their world.

Two dolls of Principal Celestia have been released for My Little Pony Equestria Girls: an "Original Series" doll with a hairbrush, accessories, and pony Celestia figure, and a deluxe "Through the Mirror" doll with accessories, guitar, and microphone. The front of the doll and pony set's packaging reads "I'm the school principal, and a pony princess!" The back of the packaging reads "As a princess of Equestria, I guide and protect all the ponies in the land." and "As principal of Canterlot High, I oversee students and keep them under my wing!"

Like her counterpart in Equestria, Principal Celestia is kind, calm, wise, and fair in her duties as a high school principal. Throughout most of the first film, she speaks in a mellow and somewhat disinterested tone, but her warmth and affection shows when she presents Twilight Sparkle with her crown.

In the third film, Celestia displays a wider range of emotion in her expression and tone, such as mild annoyance when Flash Sentry interrupts her speech during the pep rally and resentment toward Principal Cinch when she disparages Canterlot High. Against an openly hostile foe like Cinch, Celestia keeps her cool and wits about her, knowing what words to use in order to turn the tables. 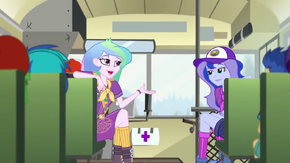 Retrieved from "https://equestriagirls.fandom.com/wiki/Principal_Celestia?oldid=96311"
Community content is available under CC-BY-SA unless otherwise noted.