Start a Wiki
Royal Pin is a male human and a student from Crystal Prep Academy.

Royal Pin appears in Friendship Games as a student of Crystal Prep Academy and member of the Shadowbolts. He first appears on the bus to Canterlot High School, and during Canterlot High's welcome party for Crystal Prep, he interacts with Indigo Zap until Principal Cinch puts an end to the party. Despite being a member of the Shadowbolts, Royal Pin was not seen participating the events.

Before the Friendship Games' final event, he is among other Shadowbolts pressuring human Twilight Sparkle into releasing magic from inside her pendant. 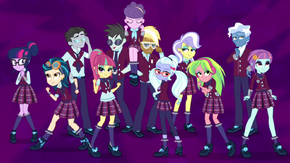 Retrieved from "https://equestriagirls.fandom.com/wiki/Royal_Pin?oldid=71211"
Community content is available under CC-BY-SA unless otherwise noted.