Sandalwood is a male human and a student from Canterlot High School. He is not named in the films, but he is named in the credits of the television broadcasts of the Rainbow Rocks and Friendship Games animated shorts.

Sandalwood first appears in My Little Pony Equestria Girls as a student of Canterlot High School. Fluttershy identifies him as one of the "eco-kids" in the school's various social cliques.

Sandalwood's presence throughout the film is minimal; he mostly appears in crowd shots with other CHS students. During This Strange World, he appears playing with a hacky sack. After Time to Come Together, he is among the first to cast their vote for Twilight Sparkle as Princess of the Fall Formal. He also appears at the Fall Formal itself wearing glasses.

In Equestria Girls: Rainbow Rocks, Sandalwood is turned against his fellow CHS students by the Dazzlings' siren magic. He performs in the CHS Musical Showcase with "Captain Planet" and "Paisley", but they are eliminated in the first round by Flash Sentry and his band.

Sandalwood briefly appears in this animated short, playing with a hacky sack in the CHS hallway as he did in the first film.

In this animated short, Sandalwood appears in the school hallway when the Diamond Dog boys rush through with Rarity's grand piano.

A Case for the Bass

In the Rainbow Rocks musical short Shake your Tail!, Sandalwood appears in the CHS audience during the Rainbooms' song.

In Friendship Games, Sandalwood takes part in the titular sporting event against Crystal Prep Academy as a member of the Canterlot High School Wondercolts. During the wood-shop portion of the Academic Decathlon, he is paired up with Micro Chips, and the two produce a shoddily put-together birdhouse. They are eliminated from the competition by Sugarcoat and Indigo Zap, who gloat over their victory afterwards.

Sandalwood appears in the background of the Friendship Games animated short Photo Finished when Photo Finish takes pictures of other CHS students.

In the Friendship Games animated short A Banner Day, Sandalwood has a starring role alongside Flash Sentry and Micro Chips. Vice Principal Luna tasks the three with making a banner to welcome Crystal Prep Academy to the Friendship Games. Sandalwood's peace-based ideas conflict with those of his friends, but the final product is met with Vice Principal Luna's approval.

In Legend of Everfree, Sandalwood camps at Camp Everfree with her schoolmates. His boat crashes into the dock due to Gloriosa Daisy.

Sandalwood is mentioned as Fluttershy's secret crush in the book My Little Pony Equestria Girls: Canterlot High Tell-All (Replica Journal). Fluttershy says, "Oh boy! That earthy guy who plays in the Green Cycle band. I'm too shy to let him know that he gives me the butterflies!" and "He is so kind to animals- he asked the woodworking class to make a birdhouse!"

"There are limited spots on the CHS team! So bring your A-game!"
— All's Fair in Love & Friendship Games

"But what we should do is portray peace through art. One love, bros."
— A Banner Day

"You're harshing the flow!"
— A Banner Day

"And how am I supposed to paint my spirit guide when there's DNA and a treble clef in the way?"
— A Banner Day 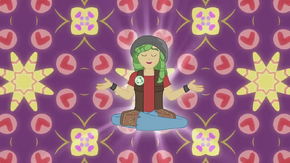 Retrieved from "https://equestriagirls.fandom.com/wiki/Sandalwood?oldid=90606"
Community content is available under CC-BY-SA unless otherwise noted.