Silver Spoon is a female human and a background character in the My Little Pony Equestria Girls franchise. She is a student at Canterlot High School and is often seen with Diamond Tiara. She is not named in the series but has a named pony counterpart in the parent series.

Silver Spoon makes several appearances in My Little Pony Equestria Girls. She passes by Twilight Sparkle in the school hallway, dances in the Canterlot High cafeteria during Equestria Girls as well as at the Fall Formal, all alongside Diamond Tiara. Her and Diamond Tiara's dance resembles their pony counterparts' "bump, bump, sugar lump rump" dance.

Diamond Tiara and Silver Spoon appear in the film, but like in the first film, they have no speaking lines.

In Music to My Ears, Silver Spoon is seen with Diamond Tiara at the Sweet Shoppe. In Perfect Day for Fun, she is seen watching the Rainbooms' concert.

Diamond Tiara and Silver Spoon only have minor background appearances in this film. They appear at the pep rally sarcastically cheering for the upcoming Friendship Games.

"Why should you care? It didn't look any good on you!"
— To Diamond Tiara, My Little Pony: Equestria Girls Holiday Special, page 33 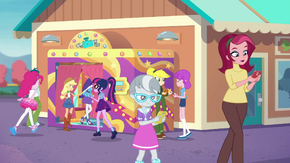 Retrieved from "https://equestriagirls.fandom.com/wiki/Silver_Spoon?oldid=96923"
Community content is available under CC-BY-SA unless otherwise noted.