Spike is the pet dog of the human Twilight Sparkle and the deuteragonist in My Little Pony Equestria Girls.

Spike the Dog is first mentioned by Pinkie Pie when she asks Twilight Sparkle if she had a twin sister with a dog who looks like hers.

After the credits roll, the human world's version of Spike appears alongside the human Twilight eating some dog food from a bowl. Unlike Spike from Equestria, this Spike only barks.

Spike appears along with his owner Twilight in the third film. As he was depicted in the post-credits scene of Rainbow Rocks, this Spike is depicted as being non-sentient and only able to communicate like an actual dog. Both Rarity and Fluttershy recognize him when he pops out of Twilight's backpack. Spike shows much concern for Twilight throughout the film, as he dislikes Canterlot High and expresses worry about Twilight's trip there.

When Twilight's pendant absorbs Fluttershy's magic, causing dimensional rifts to Equestria to open, Spike follows a jackalope through one of the rifts, and he is accidentally exposed to some of Fluttershy's magic. This gives him the ability to speak and communicate with humans, though he assures Twilight he hasn't been affected in any adverse ways.

During the climax of the film, when Twilight transforms into the evil Midnight Sparkle, Spike calls out to her and gives a pleading look, momentarily bringing her back to her senses so Sunset Shimmer can return her to normal.

Spike is present when Twilight's pony counterpart appears from the portal, happily wagging his tail at the sight of a second Twilight Sparkle.

In Pinkie Spy, Pinkie Pie has a mask that looks like Spike when posing as a dog burglar.

In the fourth film Legend of Everfree, Spike accompanies Twilight, her friends, and their class of Canterlot High students to Camp Everfree, expressing a desire to chase squirrels. Similar to Sunset Shimmer, he serves as a source of comfort and support for Twilight Sparkle as she deals with recurring nightmares and worries about Midnight Sparkle.

At one point in the film, Spike has a dream about chasing squirrels, and he briefly realizes this dream during Legend You Were Meant To Be.

In the half-hour special Dance Magic, Spike appears with Twilight and her friends as they make a music video for the "Chance to Prance" music video contest.

In Movie Magic, Spike goes with his friends to the set of the Daring Do movie. He is briefly mistaken for an animal actor in the Power Ponies movie, cast as "Hum Drum."

In Mad Twience, Spike appears as Twilight builds an android mate for him. In Pet Project, he appears with the rest of the Mane Seven's pets in their charity calendar photo shoot. In Epic Fails, he appears in Twilight's story watching her perform a chemistry experiment. He also appears in photographs in Monday Blues and Leaping Off the Page.

In A Fine Line, Spike appears waiting in line for the Tirek's Revenge video game with the Equestria Girls. In Overpowered, he appears in Twilight's memories in a basket when she flies while riding a bicycle. In The Finals Countdown, he plays with Fluttershy and later helps Rainbow Dash study for the final exams. He appears with Fluttershy lying on Twilight's bed in Star Crossed and accompanies Twilight when she attends to Principal Celestia's garden in My Little Shop of Horrors.

In the Rainbow Dash ending of Stressed in Show, Spike appears participating in Rainbow Dash's sports-based de-stressing program with Sunset Shimmer. In the Trixie ending of Rarity Investigates: The Case of the Bedazzled Boot, he steals a boot prop for the school play so he could experience being a dancer, and Rarity offers him a part in the play. In all three endings of Happily Ever After Party, Spike appears in Fluttershy's arms attending the school play after-party.

In Forgotten Friendship, Spike appears with the Equestria Girls on the beach, in Applejack's memories of the Friendship Games, and playing with Fluttershy in front of the school at the end of the special. Throughout the special, he also appears in yearbook photos with the girls.

In Twilight's Sparkly Sleepover Surprise, Spike reveals in the fact that his Equestrian counterpart is a talking dragon. In chapter six, "Spike to the Rescue", Fluttershy and Twilight give him a "very special pooch primping".

In the Equestria Girls Minis digital shorts, Spike the Dog is featured in the second short starring Twilight Sparkle and the fourth short.[1][2]

A miniature figure of Spike the Dog was shown at the 2015 San Diego Comic-Con. This figure is included with a Sci-Twi doll with pony ears and lab coat. 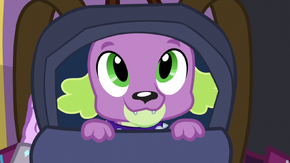 Retrieved from "https://equestriagirls.fandom.com/wiki/Spike_the_Dog?oldid=77027"
Community content is available under CC-BY-SA unless otherwise noted.