Start a Wiki
Starlight Glimmer is a female unicorn pony and former student of Twilight Sparkle. She temporary became a human featured in the Equestria Girls special Mirror Magic.

Starlight Glimmer has a similar color scheme to the non-siren forms of Aria Blaze.

In the half-hour Equestria Girls special Mirror Magic, when Sunset Shimmer returns to Equestria, Starlight appears and gives her a new magic journal and becomes very interested in the world on the other side of the Crystal Mirror. She convinces Sunset to take her along, and she transforms into a human upon arriving.

When Sunset and her friends become trapped in limbo through Juniper Montage's enchanted mirror, and Juniper starts terrorizing mall patrons, Starlight convinces her to stop by offering to be her friend, causing Juniper to put things back. The girls forgive Juniper, especially Starlight, Twilight, and Sunset who sympathize with her since they had corrupted magic experiences. In the end, Starlight helps Sunset to not worry so much about future dangers and to live in the moment, and through a message from Twilight in Sunset's journal, she is allowed to stay in the human world for a few more days. 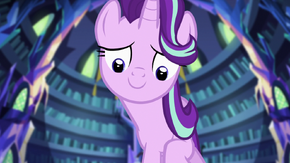 "If you spend too much time worrying about the bad things that might happen, you'll miss out on all the good things that are happening."
— To Sunset Shimmer, My Little Pony Equestria Girls: Mirror Magic

"Is fame really what you're after, or are you looking for something else? […] Like, a friend?"
— To Juniper Montage

"You think getting revenge is going to make you feel better, but it's not! Please, don't make a mistake that you'll end up regretting for the rest of your life."
— To Juniper Montage, My Little Pony Equestria Girls: Mirror Magic

"Manipulated an entire town into giving up their talents so they wouldn't think they were special."
— My Little Pony Equestria Girls: Mirror Magic

Retrieved from "https://equestriagirls.fandom.com/wiki/Starlight_Glimmer?oldid=96919"
Community content is available under CC-BY-SA unless otherwise noted.