A line of dolls based on My Little Pony Equestria Girls were released. Standard dolls have few accessories while deluxe dolls have many. Standard dolls include the main cast, Principal Celestia, and Sunset Shimmer. Deluxe dolls include Fluttershy, Rainbow Dash, and Rarity. Deluxe dolls have extra articulation on their elbows and knees while standard have no articulation. A Canterlot High Pep Rally set was also released featuring members of the main cast and Vice Principal Luna.

This Walmart exclusive line features pony versions based on Equestria Girls, including a release of Princess Twilight Sparkle & Spike the Dragon and a release of Sunset Shimmer. Sunset Shimmer comes with a comb, a mane clip, a mirror, a dress, and a necklace. A Twilight Sparkle doll that was released comes with a crown and some hair accessories. Other releases include pony and human variants of Princess/Principal Celestia and Princess/Vice Principal Luna, which come with multiple outfits and instruments.

A line of non-articulate Equestria Girls dolls was released, featuring Applejack, Pinkie Pie, Fluttershy, Rarity, Rainbow Dash, and Twilight Sparkle in their outfits from the films. Each doll, with the exception of Rainbow Dash, comes with an accessory.

A Target-exclusive extension of Equestria Girls merchandise, this line includes both human and pony variants of the Cutie Mark Crusaders.

From April 17 to May 15, 2015, McDonald's had Equestria Girls and Cutie Mark Magic toys, featuring the pony and human toys of Twilight Sparkle, Fluttershy, Pinkie Pie, and Applejack. Each toy has a brushable tail and comb.[1]

A toyline under the name Ponymania was released in 2015. This line includes Fluttershy, Zecora, Photo Finish, Violet Blurr and Pixel Pizzaz.

My Little Pony Equestria Girls Minis are a series of articulated figurines that resemble the characters of the Equestria Girls series. It was announced in October 2015, and the first line of figurines—consisting of Twilight Sparkle, Applejack, Fluttershy, Rainbow Dash, Pinkie Pie, and Rarity—were displayed at the 2015 New York Comic Con. Amy Mebberson worked on.[2][specify] Later releases include Sunset Shimmer, DJ Pon-3 and Flash Sentry. Future releases include Adagio Dazzle, Sci-Twi, Principal Celestia and Photo Finish. A series of tie-in animated shorts coincide with the toys' release.

The Elements of Friendship

This is a line of Toys "R" Us-exclusive toys and collection sets to be showcased at the San Diego Comic-Con International 2016. This line includes single releases and packaged sets of Equestria Girls Minis dolls and at least one mini-figure collection set called the Sparkle Friends Collection. 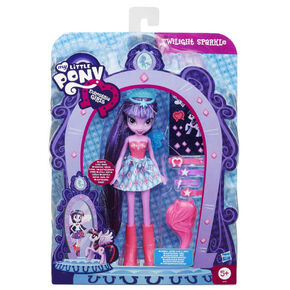 Retrieved from "https://equestriagirls.fandom.com/wiki/Toys?oldid=91959"
Community content is available under CC-BY-SA unless otherwise noted.