Vice Principal Luna is a female human, the vice principal of Canterlot High School, the sister of Principal Celestia and one of the supporting characters in My Little Pony Equestria Girls. Her pony counterpart is Princess Luna.

In the alternate world that Twilight Sparkle travels to in the film, Luna appears as the vice principal of Canterlot High School and Principal Celestia's younger sister. Sunset Shimmer deceives her into thinking Twilight destroyed the Fall Formal decorations. Before she disqualifies Twilight from running for Fall Formal Princess, Flash Sentry provides evidence in Twilight's favor, and Luna allows her to continue running.

Vice Principal Luna later holds the ballot box after the students fix up the gym for the Fall Formal. At the dance, she bears both the envelope with the winner's name inside and the Fall Formal crown's box. Luna is last seen in the film handing Sunset Shimmer a trowel so she can repair the damage she caused to the school with Snips and Snails.

In Equestria Girls: Rainbow Rocks, Vice Principal Luna accompanies her sister as she oversees the students working on signs and posters for the CHS Musical Showcase.

After the Dazzlings arrive to the school, the Rainbooms try to warn Celestia and Luna about their true nature, but by the time they are reached, they have already been hypnotized by the sirens' song. The two principals later serve as the judges for the Battle of the Bands, and the Dazzlings hypnotize them and coerce their decision in favor of the Rainbooms instead of Trixie and the Illusions.

In the encore short Perfect Day for Fun, Vice Principal Luna watches the Rainbooms' concert at the CHS carnival and poses for a smartphone photo.

In Equestria Girls: Friendship Games, Vice Principal Luna first appears beside her sister during the Canterlot High pep rally. After the CHS Rally Song, she tasks Sunset Shimmer with making sure magic stays out of the Friendship Games so the Wondercolts aren't accused of cheating.

When the Shadowbolts of Crystal Prep Academy arrive at Canterlot High, Luna warmly greets Dean Cadance. She, Celestia, Cadance, and Principal Cinch also serve as the judges for the Friendship Games. Luna is last seen in several photos during the film's closing credits, dancing in one and laughing with Cadance in another.

In Legend of Everfree, Luna and her big sister are taking the students on a trip to Camp Everfree after successfully raising the funds to do so. Once there, and meeting the ones in charge of the camp, Gloriosa Daisy and her brother, Timber Spruce, when Celestia brings up the camp gift, mentioning the sundial she and Luna dedicated to the camp, Luna voices her discontent at the sundial being useless during the nighttime. Later, when noticing the boat dock is structurally unsafe, Luna decides to close it off, much to the students' chagrin. Later, when Gloriosa, corrupted by magic from Equestria, seals off the camp from the outside world, Luna and Celestia take many of their students to shelter in the mess hall. After Gloriosa is defeated by the Rainbooms and stripped of the geodes that provided her magic, she apologizes to Celestia and Luna, deciding to give up and sell Camp Everfree to Filthy Rich to demolish and rebuild as a spa resort, but Luna and Celestia refuse to let that happen because of their former time spent there along with those memories of campers past and present who love Camp Everfree as well. Thanks to the Rainbooms, the camp holds a Crystal Ball fundraiser that is able to successfully raise the money to pay off the camp's debt and save it from foreclosure. However, unknown to Luna, back at Canterlot High School, magic has begun to seep out of a crack in the pedestal where the Wondercolt statue once stood over the portal to Equestria itself.

In Subs Rock, Principal Celestia gets a phone call while teaching a class and asks if Vice Principal Luna cannot handle it. After the response, she leaves the class to run an errand.

In Forgotten Friendship, Vice Principal Luna appears in a yearbook photo with Celestia during the song We've Come So Far. She also makes a brief cameo at the end stating "no student parking in the faculty lot", as a callback to what Sunset said to Princess Luna in Equestria.

In Sunset's Backstage Pass, Vice Principal Luna makes a background appearance walking near the food trucks at the Starswirled Music Festival with her sister during the second time loop of the festival's first day.

Vice Principal Luna briefly appears in "Blizzard or Bust". She is almost fooled by the girls' attempt to fake a snow day, but is convinced otherwise by Cranky Doodle. In "Winter Break-In" and "Dashing Through the Mall", she appears walking in the mall with her sister.

Vice Principal Luna appears on pages 39-40 of the My Little Pony Annual 2013 comic, hesitantly allowing Pinkie Pie to rally the students during the Wondercolts/Shadowbolts soccer game.

Two dolls of Vice Principal Luna have been released for My Little Pony Equestria Girls: a cheerleader doll that is packaged in the Canterlot High Pep Rally Set, and a deluxe "Through the Mirror" doll with accessories, guitar, and microphone.

Much like her counterpart in Equestria, Vice Principal is firm yet fair and understanding. Unlike her mellow-voiced sister, she speaks and conducts herself authoritatively, and she keeps her office dimly lit. Luna is not lenient in delivering punishment to the students, as shown in her interactions with Twilight Sparkle, Sunset Shimmer, and Photo Finish.

In the third film, Luna is on very friendly terms with Crystal Prep's Dean Cadance, a considerable far cry from how she views the haughty Principal Cinch.

"Why would you think Twilight was responsible for something like this?"
— To Sunset Shimmer, My Little Pony Equestria Girls

"I think it should be fairly obvious that the school cannot let someone who would do something like this compete for the Fall Formal crown."
— To Twilight Sparkle, My Little Pony Equestria Girls

"Perhaps Sunset Shimmer is just eager to make someone else out to be a bad element so that her actions at the Fall Formal will become old news."
— My Little Pony Equestria Girls: Rainbow Rocks

"Photo Finish, our yearbook photos this year could use a bit more... mmm, pizzazz."
— Photo Finished

"I'm sure you'll come up with the perfect sign that lets the Crystal Prep kids feel welcome but also conveys that we are stiff competition."
— A Banner Day

"It's inspiring but still warm and welcoming. I love how your work is literally enmeshed. Truly excellent work, boys."
— A Banner Day

"Sunset Shimmer, you came here from a world of magic. Perhaps you can get to the bottom of our magical development."
— My Little Pony Equestria Girls: Friendship Games

"Oh, it's always such a pleasure to see you, Dean Cadance. Even if it means another defeat."
— My Little Pony Equestria Girls: Friendship Games

"When we were your age, we made some of our favorite memories in these woods, and we're sure you will, too."
— My Little Pony Equestria Girls: Legend of Everfree

"[coughing] Even though "some people" thought it was a little impractical, since the sundial can't be used at night."
— My Little Pony Equestria Girls: Legend of Everfree

"Why do you think we wanted our students to come here?"
— My Little Pony Equestria Girls: Legend of Everfree 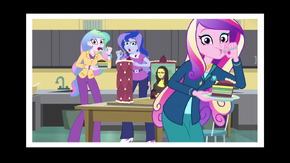