Start a Wiki
Violet Blurr and Pixel Pizzaz, collectively known as the Snapshots, are female humans and students from Canterlot High School. They are unnamed in the films and animated shorts, but they are named in merchandise.

In the DVD/Blu-ray audio commentary of My Little Pony Equestria Girls: Rainbow Rocks, Jayson Thiessen states "I like Photo Finish's bandmates as well", and Ishi Rudell expressed disappointment that "we never got to see the Photo Finish band [perform]. Would have liked to see what they came up with."

In the film Rainbow Rocks, Violet Blurr and Pixel Pizzaz appear as members of Photo Finish's band "Photo Finish and the Snapshots," during the CHS Musical Showcase. In the first round of the competition, they attempt to sabotage the Rainbooms by tripping up Rarity with magnets and marionette strings.

The Snapshots advance through the first round past the Diamond Dog boys but are defeated in the second round by the Dazzlings. They are last seen jeering the Rainbooms after they advance to the final round. During this, Violet Blurr holds a musical triangle and Pixel Pizzaz holds a pair of cymbals.

Friendship Through the Ages

In the encore short Friendship Through the Ages, Violet Blurr and Pixel Pizzaz appear in a crowd shot during Rainbow Dash's verse.

My Little Pony: Equestria Girls: Rainbow Rocks: The Mane Event, a screenplay novelization of the film Rainbow Rocks, includes Photo Finish's bandmates but does not individually identify them.

Equestria Girls dolls of Violet Blurr and Pixel Pizzaz, together with another such doll of human Photo Finish, have been displayed at the 2014 American International Toy Fair and released in a Toys "R" Us exclusive Ponymania "Photo Finish & the Snapshots" 3-pack, packaging of which names them with trademark symbol and gives them the description "They show off their rockin' style for the cameras!" Toysrus.com has used the misspelling "Pixel Pizzazz" on a listing of the 3-pack, and an Invodo video for them misidentifies the Snapshots as each other.[3]

Pixel Pizzaz: Nice to meet you! 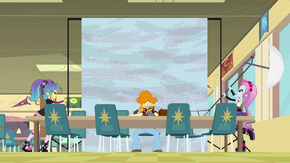 Retrieved from "https://equestriagirls.fandom.com/wiki/Violet_Blurr_and_Pixel_Pizzaz?oldid=90615"
Community content is available under CC-BY-SA unless otherwise noted.