Wallflower Blush is a female human who appears as the antagonist of Forgotten Friendship.

Depiction in the Digital Series

In Forgotten Friendship, she was a student whom many of the others at Canterlot High simply ignored, until Sunset Shimmer bumped into her. Upset that Sunset and the others forgot about her and her status at the school's yearbooks, she uses the Memory Stone to erase Sunset's memories and those of her friends and the rest of the school.

Sunset and Twilight, with their friends, later use their magical powers to defeat her and destroy the Memory Stone, restoring their memories. Wallflower was later assigned as a gardener.

She also has a song that describes everyone else's ignorance of her, "I'm Invisible". 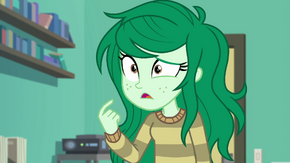 Retrieved from "https://equestriagirls.fandom.com/wiki/Wallflower_Blush?oldid=104036"
Community content is available under CC-BY-SA unless otherwise noted.