Zephyr Breeze is a male human student from Canterlot High School and Fluttershy's younger brother who appears in the My Little Pony Equestria Girls: Better Together short Overpowered.

Better Together/ Choose Your Own Ending

in the My Little Pony Equestria Girls: Better Together short Overpowered, asking Rainbow Dash out on a date before being snubbed. In the "Choose Rainbow Dash" ending of Best Trends Forever, he appears following the Rainbow Dash-inspired fashion trend. In the beach-themed short Blue Crushed, Zephyr tries to impress Rainbow Dash with his surfing skills and fails miserably. In Schedule Swap, Zephyr is shown in woodwork class, showing off with a flute he made. In I'm on a Yacht, he appears at a dance party on the Luxe Deluxe cruise ship

Zephyr makes a brief cameo in My Little Pony Equestria Girls: Forgotten Friendship, hanging out with Snips and Snails outside Canterlot High School.

Zephyr Breeze appears in the beginning of the special just as The Rainbooms arrive at Starswirled Music Festival talking to "Aqua Blossom", appears again at the festival ticket line, and in the audience at the PostCrush concert. 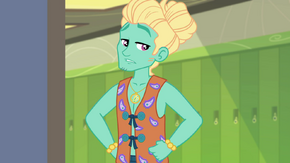 Retrieved from "https://equestriagirls.fandom.com/wiki/Zephyr_Breeze?oldid=90618"
Community content is available under CC-BY-SA unless otherwise noted.